In his keynote at JupyterCon, Paco Nathan discusses the connections between an open society and open science. He refers to work by Vannevar Bush (and Jorge Luis Borges?) and Karl Popper’s The Open Society and Its Enemies in particular. 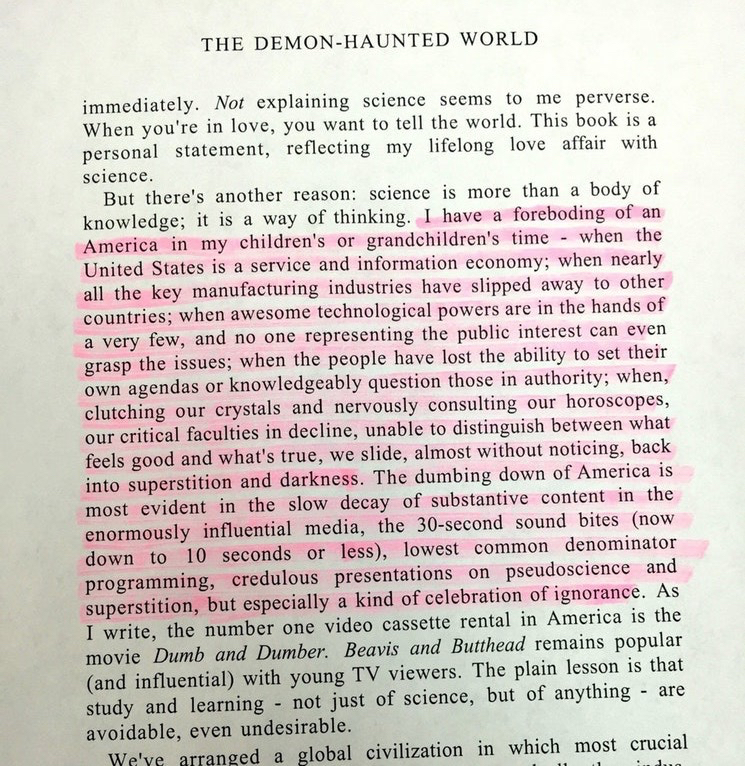 Carl Sagan writing in “The Demon-Haunted World” in 1995

What better way to spend a Sunday than watching some great videos that explain or treat science? [Real Clear Science][] has you covered. I am particularly fond of the video of [Schrodinger’s Cat][]. I am less fond of the Neil de Grasse Tyson’s response to the question of genetically modified foods. I think Tyson’s shows that expertise in one realm, astrophysics, does not transfer to other realms, biology. It’s my understanding, at least, that the kind of tinkering with the genome achieved through plant hybridization is different from that achieved through direct tweaking of genes. I’ve checked with biologists, and they say I’m right and Neil is wrong. *Sigh.* Neil, Neil, Neil.

_The Guardian_ has a translation of the _Der Spiegel_ [interview with Peter Piot][] who was a researcher at a lab in Antwerp when a pilot brought him a blood sample from a Belgian nun who had fallen mysteriously ill in Zaire. The title of the interview is misleading: Piot doesn’t claim to have discovered Ebola, only to have been part of a team, as well as a larger international effort, to understand what in fact the virus was.

The misleading title, misunderstanding the nature of science and scientific inquire, underlines something that Piot himself when asked **Why did WHO [the World Health Organization] react so late?**:

> On the one hand, it was because their African regional office isn’t staffed with the most capable people but with political appointees. And the headquarters in Geneva suffered large budget cuts that had been agreed to by member states. The department for haemorrhagic fever and the one responsible for the management of epidemic emergencies were hit hard.

This is what happens when you politicize science, something usually accompanied by undermining science through de-funding the agencies that have made so much basic and applied research possible.