The David Rumsey Map Collection is a pretty impressive accomplishment. According to the site, the collections “contains more than 150,000 maps. The collection focuses on rare 16th through 21st century maps of North and South America, as well as maps of the World, Asia, Africa, Europe, and Oceania. The collection includes atlases, wall maps, globes, school geographies, pocket maps, books of exploration, maritime charts, and a variety of cartographic materials including pocket, wall, children’s, and manuscript maps. Items range in date from about 1550 to the present.” 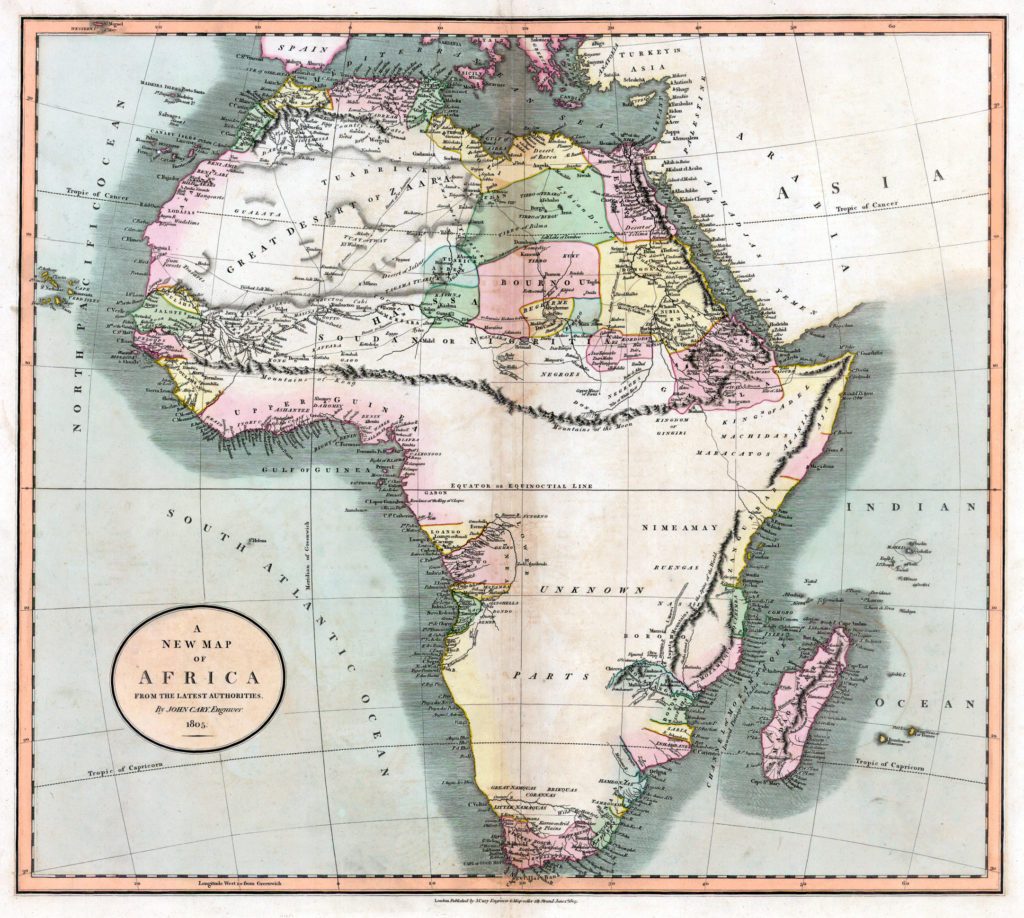 [IsoChrone Maps][] look a lot like what we now call “heat maps” in the current moment. (Hat tip to [Scott Weingart][] for the heads up.)

Vox has a great series of *40 Maps That Explain X*. So far they have:

Lincoln Mullen has developed an interactive map of the United States that allows you to explore the [spread of slavery][] from a little before 1790 to a little after 1860. Based on census figures, I am guessing, the map changes dynamically as counties are added and/or divided. Each county has information for the population of slaves, free African Americans, total free population, and total population, which is rendered either in percentages or in number of persons per square mile.

Working in south Louisiana, I was curious to explore a number of things, that I will perhaps write about one day, but as I looked at the larger map and played with the various views, I noticed something:

I expect to see increased percentages along waterways like the Mississippi, a trend that generally holds true in Louisiana with concentrations of slaves rising near bayous, but I cannot for the life of me immediately explain that crescent of greater enslavement that runs through Mississippi, Alabama, and Georgia. I’m guessing it has to be a geological/geographical feature that I cannot immediately discern.

Check out Mullen’s project. This is good, compelling scholarship, the kind that provokes questions among its users.

I came across this description of an Australian man who has taken my childhood habit of making maps of places I imagined to a whole new level.

[Stamen Design has made it possible to produce a dynamic map using Open Street maps data with water color effects.](http://stamen.com/) The site is under a heavy load right now, thanks to picking up a lot of links in the blogosphere, no doubt, but it’s definitely worth taking a look at later.

For my own research, I make my own maps, usually creating them in Adobe Illustrator, where I create hand-drawn lines on top of commercially-available maps that I have downloaded (e.g., Google Maps), created through software applications (e.g., Topos), or scanned from paper. This is the only I have known to create a map that displayed the information I felt my reader needed and not too much more.

Turns out, there is another way to do this, perhaps, and it is to use [Open Street Maps][osm]. I am not entirely sure what all is involved, but I look forward to checking it out as soon as the revision of the aesthetics paper is done.

Fellow folklorist Lisa Gabbert has an essay in Glimpse. A free, full-screen preview of the journal is available, but that does not include all of her essay. The journal appears to be a good size and is full-color. It looks great. I like that her essay explores onomastics with a non-scholarly audience. (I am not, to be clear, exactly sure who the audience for Glimpse is, but I like that they are trying something like this.)