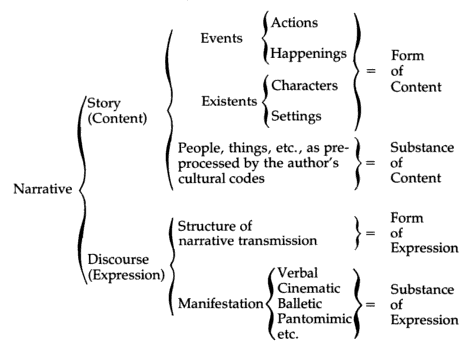 With an understanding that no text is composed, or received, in a single “mode of discourse” (description, narration, exposition, etc.), this paper explores the nature of non-narrative elements found within folk narrative, pursuing a path first begun by literary critic Meir Sternberg and linguist Carlota Smith. While Sternberg and Smith used literary texts as the basis for their study, this paper draws, like the previous one, upon folk narratives collected by a number of folklorists, including myself, in order to see if there are consistent structures of discourse present and at what level those structures lie.

Save a few exceptions, folklorists have largely approached folk narrative as given, with occasional considerations of non-narrative elements. Our close readings of texts tend to focus on the topical and not the formal, on the contextually meaningful and not the structurally significant. This paper is part of a larger project to understand the nature of the components that make up a folk narrative text in order to explore what structures might emerge, and which, if any, are general and which might be cultural. The project is founded on the work of literary critic Meir Sternberg and linguist Carlota Smith, each of whom pursued parallel paths in trying to discern modes with a given text. Starting in the late seventies and working through the nineties, Sternberg attempted to extend narratological considerations to include non-narrative moments and passages in texts. Pursuing similar research but apparently unaware of Sternberg, Smith developed the notion of “modes of discourse,” based on her own work on temporal aspect, in which she explored how languages encode time and how they encode the way events happen over time. Both Sternberg and Smith, however, draw upon literary sources for the exploration and application of their ideas and methods. What would a consideration of folkloric texts bring to the table, and what role would dialogue—long established as a central feature in oral text-making—play in a possible revision of any typology of discourse modes? This paper only briefly outlines Sternberg’s work, as well as referencing the work of Labov and Waletzky which has had some role in folkloristic considerations of narrative (as outlined in a previous paper), in order to provide a backdrop for a consideration of Smith’s work to folkloristic considerations of text. In a previous paper I argued that folklore studies is as guilty as other domains in proclaiming anything narrative. In this paper, I explore other modes of discourse and then consider just how little the narrative mode has to be present for it to be received as narrative in its entirety. All examples are drawn either from my own fieldwork or from colleagues who have entrusted me with examples from their own work.