I was interested in the data for the age of European populations, but I found myself more taken with the color scheme used in the visualization: 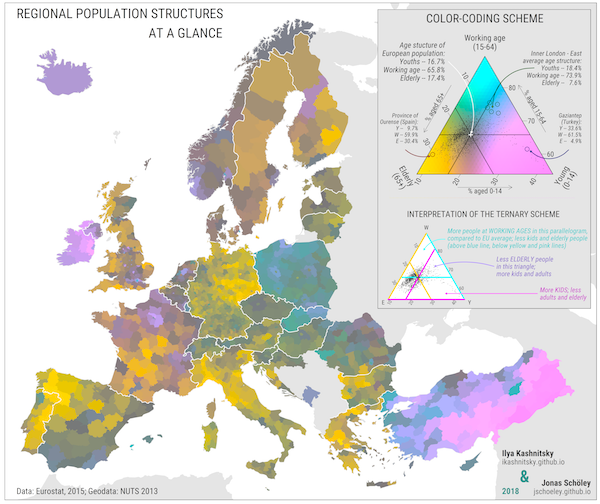 A full-sized version of the image is available on request — it’s really big. But the map is part of an article in The Lancet. 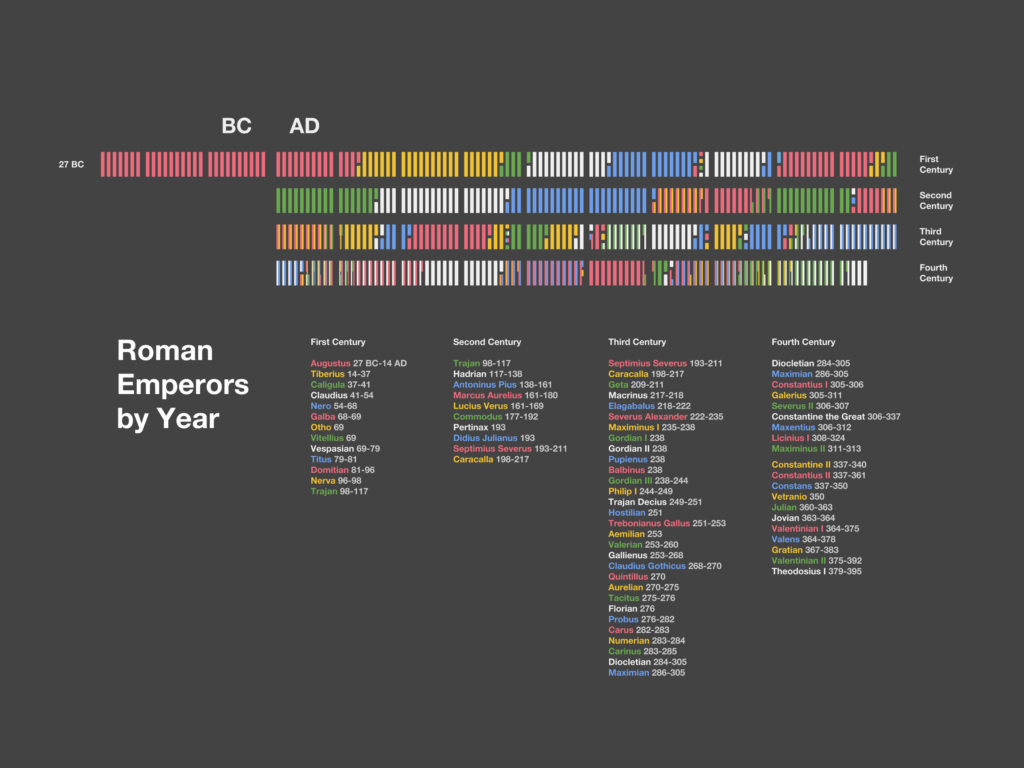 This kind of data presentation strikes me as close to disingenuous. I understand that somewhere in someone’s mind, the thought is to maximize the width of the diagram, but when all the measures are the same, these all represent percent changes of opinion among the same population responding to the same survey, then the shift in scale actually misleads readers, who easily see the big red bars, that there has been large changes across the board. Instead, there’s been changes of 20%, 15%, and 7%. Those differences in size are hard to read with the light gray numbers up above, almost lost under the bold black of the diagram’s title.

You can do better, The Guardian.

The Rhythm of Food combines data from FooDB and Google Trends, looking for search patterns across time — and cleverly recognizing that the cycle of the year is a good way to organize time.

Tryo Labs is continuing its tradition of retrospectives about the best Python libraries for the past year. This year, it seems, it’s all about serverless architectures and, of course, AI/ML. A lot of cool stuff happening in the latter space. Check out this year’s retrospective and also the discussion on Reddit. (And here’s a link to Tryo’s 2015 retrospective for those curious.)

Flowingdata has a list of their own: Best Data Visualization Projects of 2016/. If you haven’t seen the one about the evolution of bacteria that is a “live” visualization conducted on a giant petri dish, check it out.

I love visualizations like this one, and I can imagine compiling more like this one — a good visualization of the new “tree of life” — as well as a really nice rendering of the periodic table into a *things you need to know* book/portfolio. 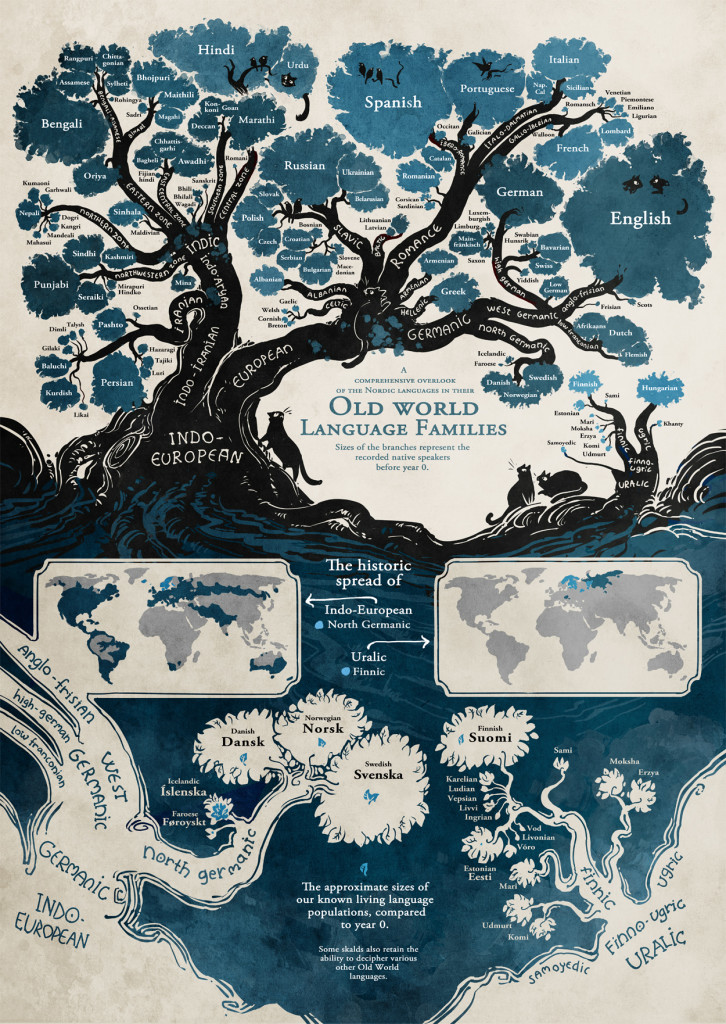 EDIT: *I forgot to note that [Ethnologue](http://www.ethnologue.com) is a great resource for language information.*

[Dear Data][] revisits the idea of correspondence with the twist that the two correspondents are designers who gave themselves the task of visualizing a week’s worth of data drawn from their own lives: animals seen, sounds heard, time spent alone.

I believe the ration is 8 to 13 for the number of revolutions around the sun for Venus and Earth to be aligned. (Or maybe it was 5 to 8.) Anyway, it produces the following graph:

Venus and Earth in Motion

[IsoChrone Maps][] look a lot like what we now call “heat maps” in the current moment. (Hat tip to [Scott Weingart][] for the heads up.)

[Brad Paley][] and [Edward Tufte][] are both fond of turning to past work in order to understand how to do better work in the present. Tufts is probably better known, but I actually had the chance to meet Paley and to talk with him, and he is a generous, insightful individual. Like them, I like to explore design work from the past to see what it can teach us in the present about communicating effectively and eloquently.

Case in point is this Army Air Force film entitled simply _FLAK_ (1944, T.F. I-3389), which you can watch for yourself on [Youtube][] — and it’s probably available at the Internet Archive, if you look for it. The term is itself from the German abbreviation of *Flugzeugabwehrkanone* [air defense cannon], and reveals, perhaps that it was the preferred term over *Ack-Ack* which was the British term for *anti-aircraft* defenses. The film itself, like others from this era, is a master-class in what you can do with limited resources, both in terms of time and money, and when your need to communicate is urgent: in this case the film is addressed to air crews who are, perhaps, not keen to follow proscribed course and altitude changes or who want to make changes but are told not to. I can only imagine how terrifying flak was to experience while bouncing around inside one of those bombers, and any film would have to overcome that fear.

There is probably a much longer post for the visualizations included in the film, and in others like it, and none of them will be well served by stills, but here is at least one example that, I hope, captures the spirit of the visuals used:

The still comes from a moment in the film where the narration has explained how long it takes for air defenses to acquire a target, establishing its course and altitude; predict its course; communicate that prediction as firing directions to associated batteries; and for the batteries to fire and the shells to reach the targeted area and explode. It was something like 35 seconds in 1944. The recommendation was to make course changes about one second for every 1000 feet of altitude, and the segment that follows explains why simply short zig-zags are actually dangerous — because they can so easily be normalized.

The lines and graphics unfold across maps and landscapes in ways that make complete sense and allow viewers to “see” for themselves the way things work.

I’m working on the illustrations for _The Makers of Things_. Some get done quickly; some take far longer than I imagined. The illustration that pairs a map view with an elevation cross section proved to be one of the latter (as always, click to embiggen):

Plan and Elevation of Eunice to Mamou

Many thanks to the folks at O’Reilly for organizing and sponsoring the webcast “It’s About Time: Using Temporal Visualization Techniques to Give Data More Meaning and Context” with Hunter Whitney. Here’s [O’Reilly’s description][]:

> We typically don’t give a moment’s thought to the timing and sequence of most of life’s activities and events, but time and order play a significant role in much of what we do. Further, the overlap between one series of events and another can reveal complex patterns and prompt important insights, once detected. However, most database and visual analytics tools are not equipped to reveal the meaning and context that nuanced time representations can provide. Temporal visualizations can shed new light on many areas from healthcare to cybersecurity to sports, to name a few.
>
> This webcast will include key ideas, techniques, and practical applications to represent and explore event sequences and their temporal patterns. To illustrate these ideas, a visualization tool called EventFlow will be demonstrated by researchers at the University of Maryland’s Human-Computer Interaction Lab, where the tool is being developed.

Here are links both from the presentation and from the group chat:

* The book [Visualization of Time-Oriented Data][] “starts with an introduction to visualization and a number of historical examples of visual representations. At its core, the book presents and discusses a systematic view of the visualization of time-oriented data.”
* [EventFlow][] is software designed by UMD’s HCIL to help hospitals visualize patient-based workflows: what got done when and in what sequence. (It looks very complicated and very specific, but I wonder if it couldn’t be bent to other purposes.)
* The [Wind Map][] is the coolest thing I have seen in a long time.
* [Merely a Node][] has some examples by Whitney.
* A nice example of being able to compare [months][].
* Don’t forget [Google Charts][].